How can you not use an antivirus in this vulnerable world of technology? I will call you a real gallant if you say you don’t need an antivirus. But as a consequence, your computer is going to suffer a lot. No one can assure that a computer is secure and can’t block any malware attacks. I have heard that even the computers with active antivirus protection were affected by malwares. Then, just think the case of computers without a security tool!!

Selecting an antivirus is a tough row to hoe. You can’t choose one blindly. The selection procedure needs analysis of specification, collection of feedbacks and careful study of reviews. But don’t worry. I have done everything for you. Now, after all the procedures, I am presenting an extremely effective antivirus which is G data Antivirus. 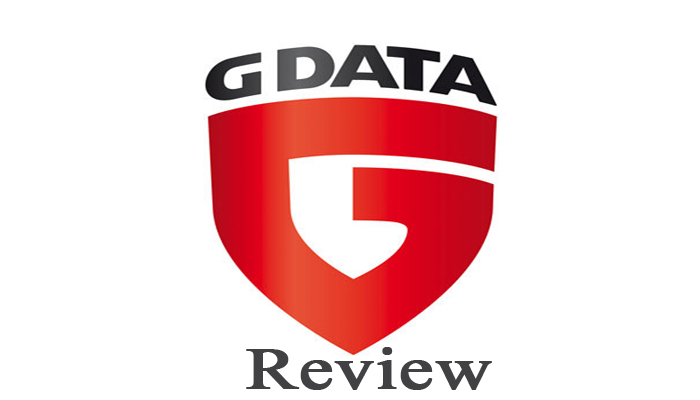 G Data is an German company founded in 1985. It provides a collection of anti- malware tools. The founders of this company are known as the creators of first antivirus software in the world. All of us know that we can’t expect much from a primitive product. But because the product was created in early 1980’s, no one can question the reliability of this tool.

I am more than happy to introduce such a useful utility (most underrated one too) to you. Click here to read more about G Data Antivirus on Wikipedia. Let’s just go through the features of G Data Antivirus now. 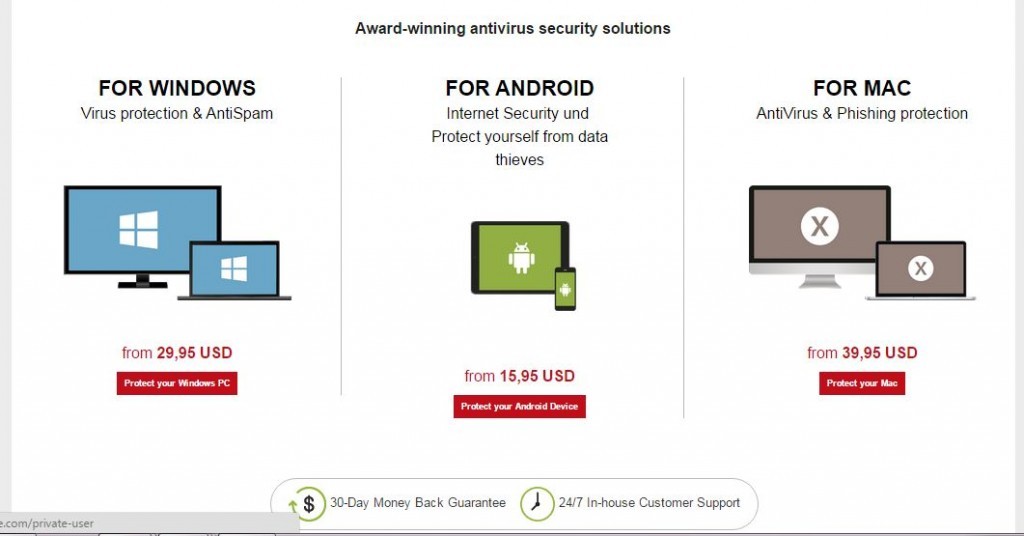 No one will be ready to download an antivirus if it offers just the scanning feature. We all look out to get extra. G Data Antivirus is a treat for those who want elegant software with enhanced functionality without spending much.

G Data antivirus is available for Windows, Android and Mac as well. There is a slight variation in the price of each of them.

Anyway, let’s look into the features of G Data Antivirus. How to install a free trial of G DATA business solutions 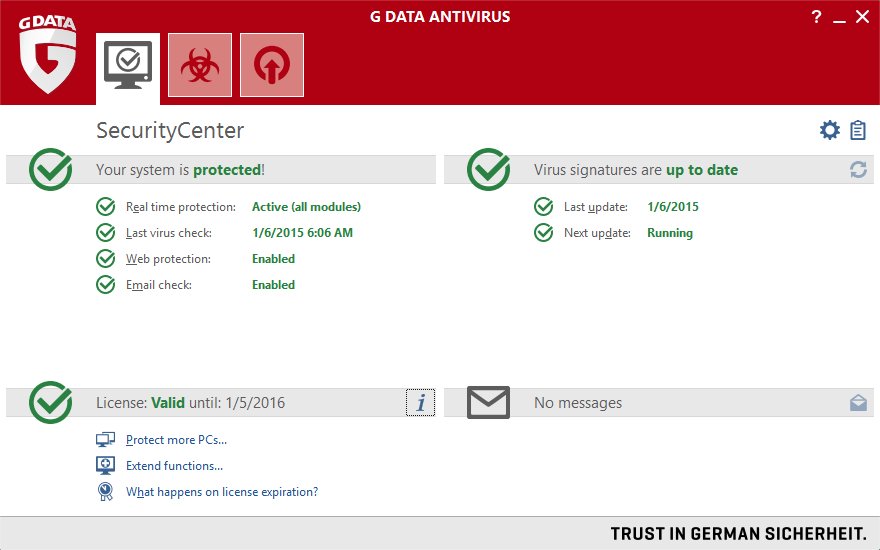 Everyone likes organized things. It makes everything productive. I don’t like to sit in my room when it is unorganized and shabby.

Developers and designers of G Data know this human psychology very well. That’s why they have developed such an elegant and clean UI. Below the title bar you can see three options including the security center or home. The main section of the home is divided into four parts, two columns, and two rows. The very first section says about the security status of your device. A tick mark and ‘Your System is Protected’ message indicates that everything is fine. Beneath that, some details are also shown.The second part displays virus definition status. If your virus definitions are up- to- date, you can see a similar tick as in the first section.

Last two sections gives a gist of the license information and notifications (or messages) respectively.

Secure the computer is the foremost function of a website. G Data Antivirus is providing unbeatable security services. Apart from the usual scanner, there is a monitor that analyzes every file you modify and open real- time. If you open an infected file, you will get the notification. By this way, G Data Antivirus keep your computer safe from malware attacks.

G Data Antivirus has given behavior- based detection. It looks for a pattern of malicious behavior instead of scanning a file and flagging it as malware right away. 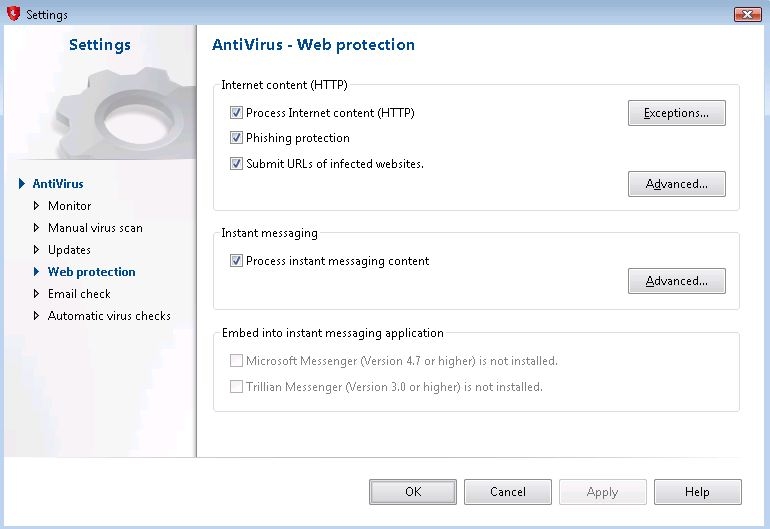 There is a URL blocker to make you stay away from hackers. Phishing is a hacking technique in which hackers clone a reputed website and steal your credentials. G Data’s URL blocker gives you a warning message when you try to access a malware- spreading website. 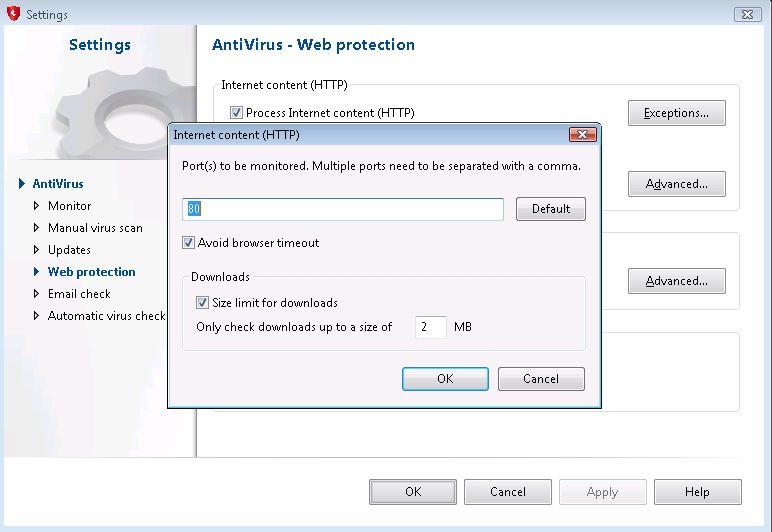 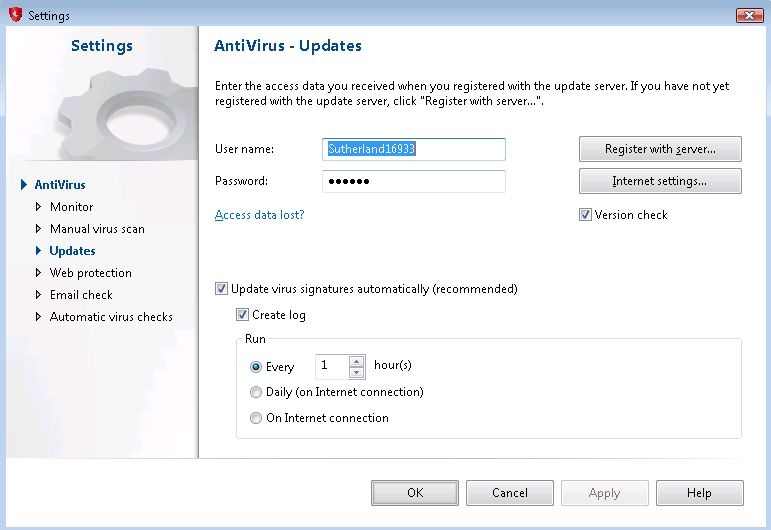 A regularly updated antivirus is a must for an antivirus. When you update an antivirus, its web gets widened by updating the virus definitions. 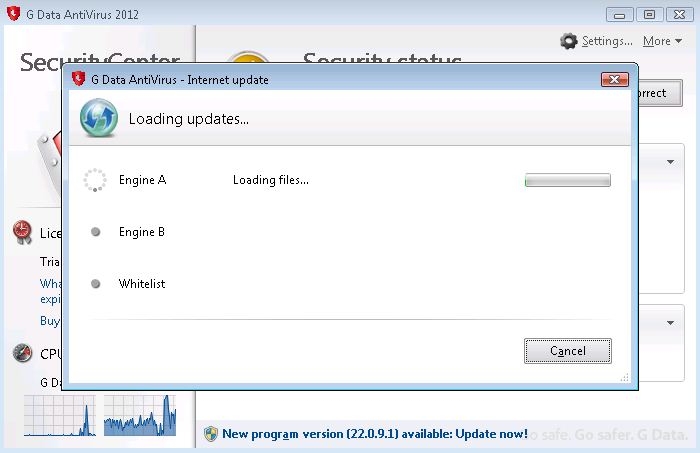 The update process may take some time to load, download and install. If you have an active internet connection with decent speed, chances are great for you to get the process done at once. 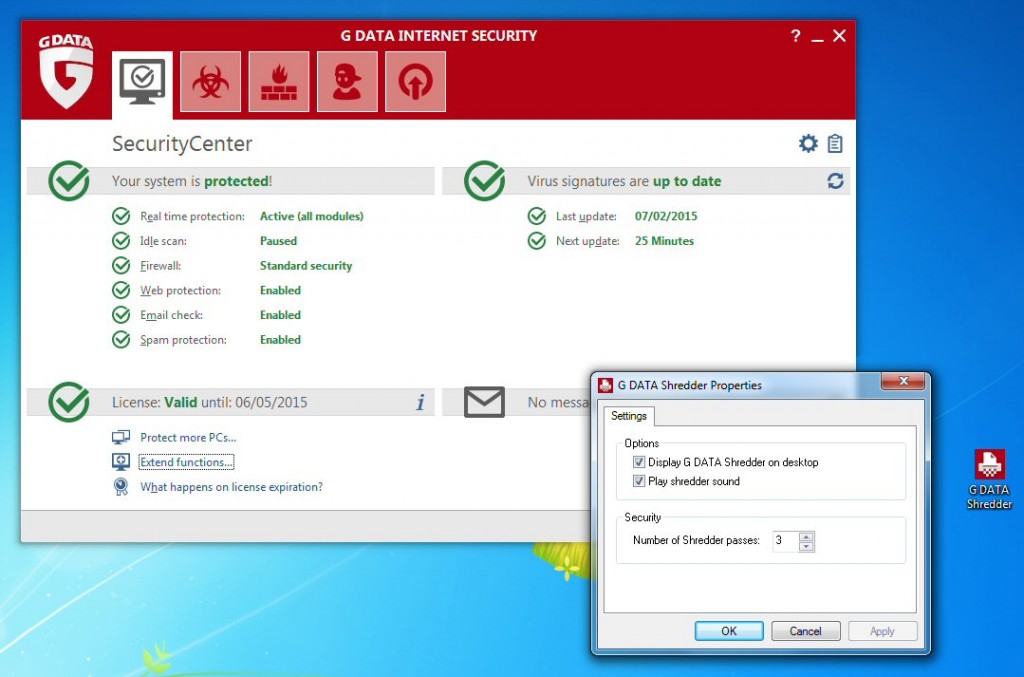 There are a lot of additional features available with G Data Antivirus. One of them is data shredder. Sometimes you might have faced difficulty in deleting certain files. Or else, you might have doubted about the possibility of recovering when you deleted a secret file. G Data Antivirus’s data shredder is a solution for you. It can be used to delete any file without worrying much. An email virus blocker is available which scans every attachment in your inbox and flag if you get any malware. 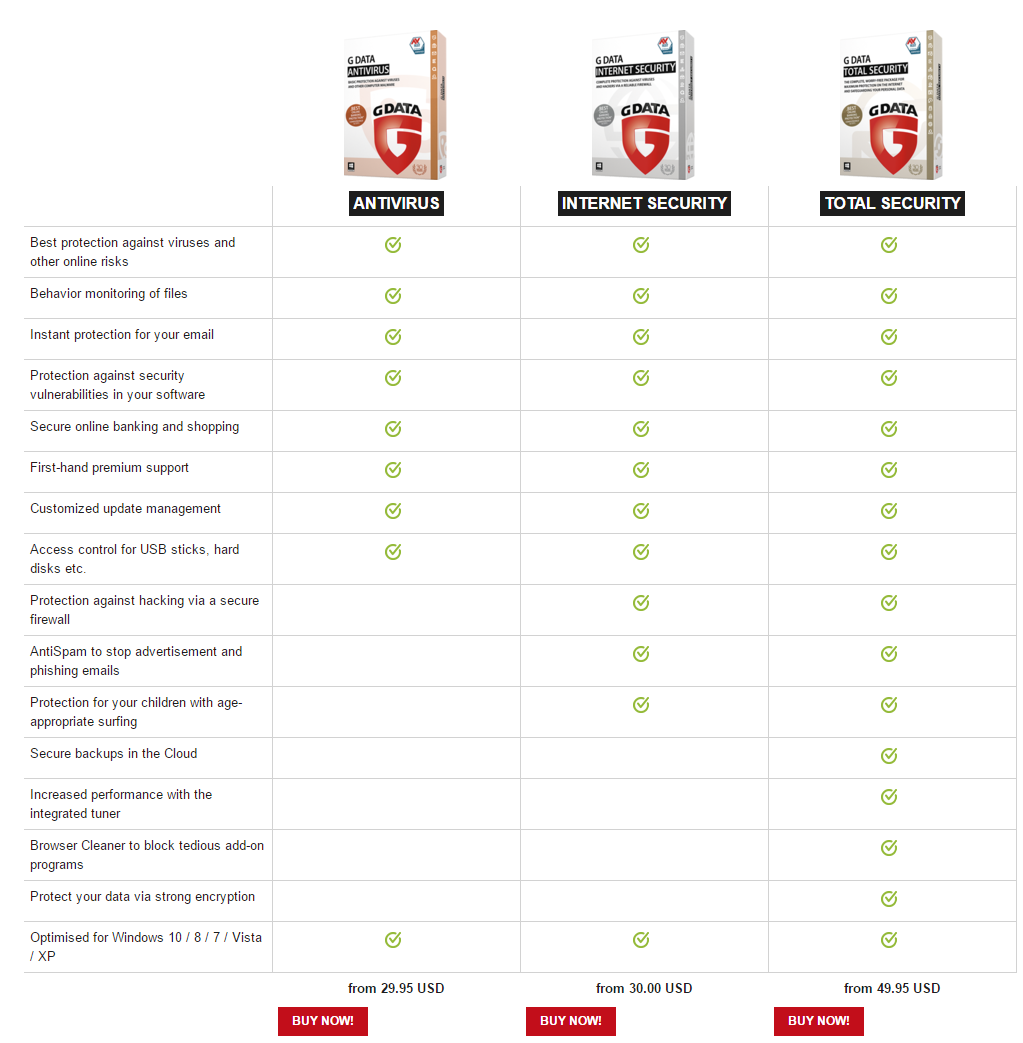 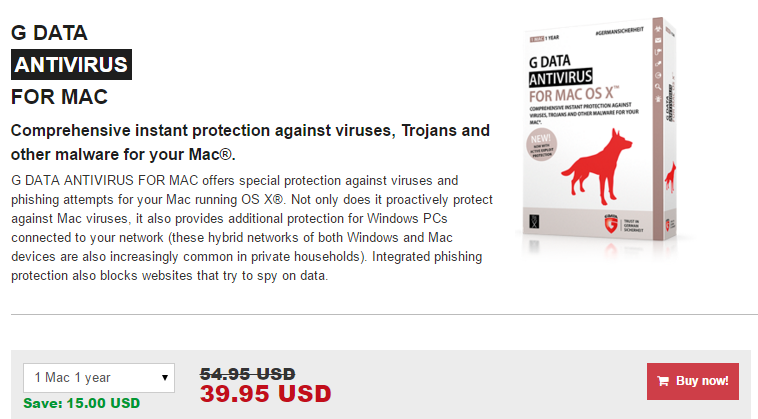 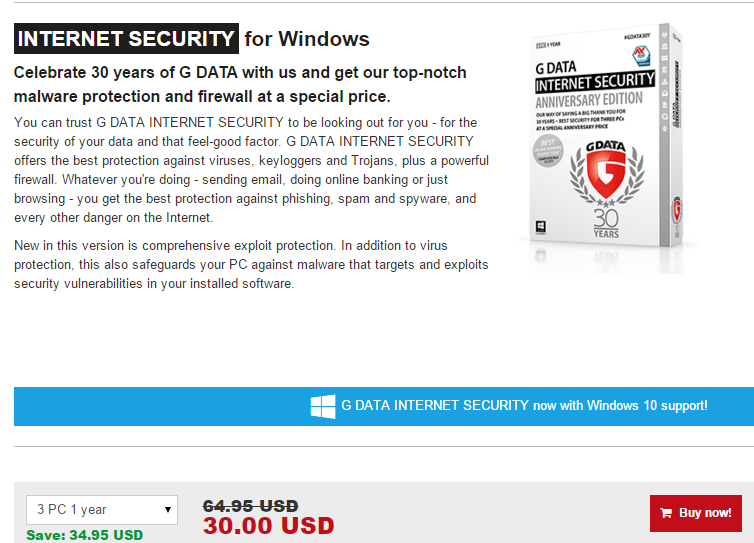 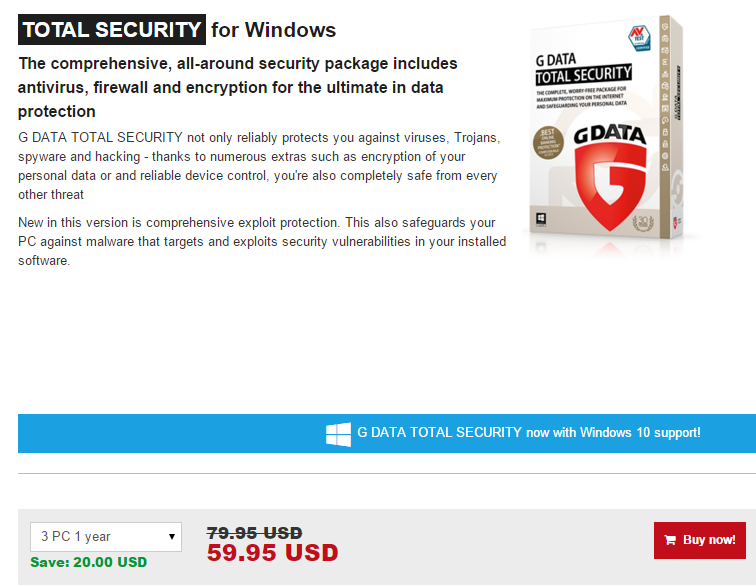 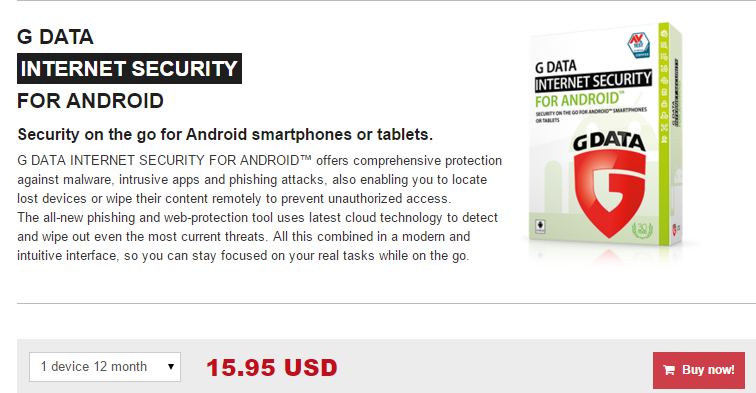 All of us love cheapness when it comes to the price of a product. G Data is an established antivirus developing company. They don’t need any extra buck from you.

The Windows edition costs you about $30, Android $15 and Mac version $40. Checkout the screenshot given below to have more details about the pricing option and plans.

G Data AntiVirus offers good protection against viruses and other malware. It scans incoming email for threats and protects you during online banking transactions. It protects your personal data even when you are on social networks.

G Data Antivirus is a much- needed security tool for any computer. As the Android and Mac editions are also available, you can protect all your devices not matter what its platform is.

A free trial is available which lets you experience G Data antivirus’s security features. Later, you can decide whether to go with it or not.

I am pretty sure that the software will grab your attention. It has such awesome and powerful features to protect your devices. Click here to visit the official download page. You can see various G Data products there including Total Security, Internet Security, and Antivirus. Choose any of them to download the trial product. Follow G Data on Facebook, Twitter, Youtube, Google+ & Linkedin