Micromax has recently unseated Samsung from the throne of the top selling smartphone in India. The company which was a fledgling even some years ago has become a star through its own efforts. The firm has a vast range of smartphones available in different price ranges.

This caters to the broad spectrum of smartphone buyers who cannot afford to buy very expensive handsets but are much interested in them. 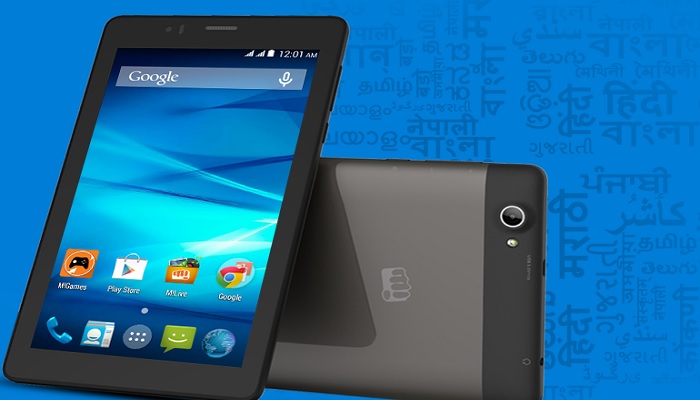 It comes at a price of Rs 6999 and has been made available in stores since December 20. The tablet comes in 21 local languages which make it easier for those who are not well-versed with English to use it. The feature is indeed quite unique. Apart from this feature, the other specs are quite similar to what is offered in affordable tablets.

The screen is a regular IPS one, measuring 7 inches. It has a resolution of 1024X600 pixels. The Micromax Canvas Tab P470 has a pretty weak resolution for the size of the tablet which means that the pixel density won’t be too high. Legibility under the sun as well as viewing angle for it is quite questionable.

Graphics oriented games may also seem to underperform. The tablet is powered by a dual core processor that clocks a speed of 1.3GHz. The dual core processor can be quite disheartening which means that playing games with a lot of graphics can be difficult. It may produce a lot of stutter and frames may drop. 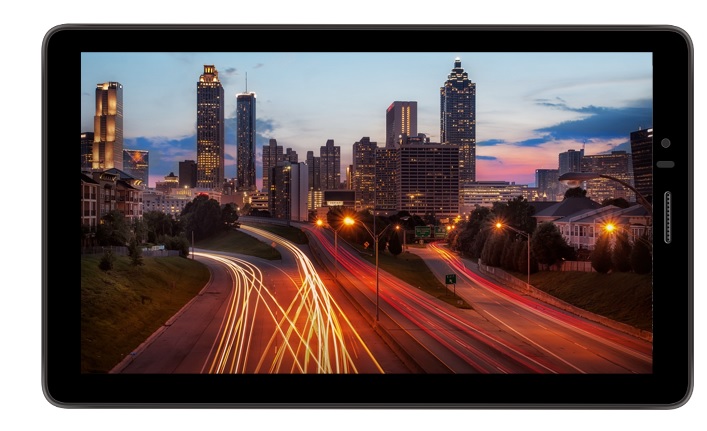 The tablet however has Android KitKat 4.4 installed in it which makes it quite different from others which still offer Android JellyBean or ICS.

The tablet has 3G enabled in it and two SIM cards can be inserted which indicates that the device can support voice calling. Being 3G enabled means you can make use of the 3G networks that are provided by various carriers for surfing the Internet. Aside from the 3G connectivity, you can plug the device to a Wi-Fi network for speedy connectivity. Bluetooth 2.1 is the other option of connectivity that is there in the tablet for you to connect with your friends and family for sharing data.

Selfie enthusiasts would be very happy to know that the tablet has a 3MP camera in front. The rear camera is a 5MP one which clicks pretty decent photos. Skyping too would be a delight on the device. The battery set into the handset is a 3200 mAh one. Much like other devices from Micromax, lots of other applications are available on the tablet.

Standard applications such as Google Drive, Hangouts, Gmail and Chrome are available amongst the other applications. This is the second tablet launched by Micromax within a short span of time, the first one being the Canvas P666 which is powered by the Intel Atom processor.

In the last couple of months, Micromax had also introduced the Canvas Selfie touch phone along with a new line called the Yu. The first Yu smartphone, Yureka was launched on December 18 and is retailed through an online e-commerce partner. The phone has the Cyanogen UI installed on top of the Android KitKat. It has a 2GB RAM along with an Octa Core processor from Snapdragon Qualcomm.

The pricing of the phone is very attractive at Rs 8999 which is quite affordable for most people. The handset has a 13MP rear camera along with a 5MP front camera which is very handy for those people who prefer not to carry around a digital camera.

Because the device is available online only, there is a lot of frenzy among people to get their hands on it. It has garnered favourable reviews from all for its styling, design and the power packed in it.

Micromax has been steadily climbing the charts from being a producer of low cost handsets to one that produces great devices with good resolution. Canvas is one of the biggest ranges of devices that Micromax has where the screen sizes are big enough and advanced features are included in the phones for supporting different tasks.

The Canvas Knight and Canvas Doodle have been two prominent handsets from the company which have done well in the market.

Comparison with other Smartphones

The popularity of Indian and Chinese smartphones is rising in the market mainly because of their affordability, stylish design and jaw-dropping features. Recently, the market witnessed frenzy for the Xiaomi Redmi Note handset. Other devices which are performing well are Gionee Elife and OnePlus One.

These devices not only look sleek but are also highly durable and functioning. Most people prefer using their smartphones for a year or two before upgrading to a new one. This is one of the reasons why they prefer to go for low cost handsets because they can be replaced easily and they provide bang for buck. Other companies such as Karbonn have also been doing well in the market for the same reason.

Moreover, smartphones from Samsung or Sony even do not come without flaws of their own, even at higher prices. These handsets have lost their charm over smaller players.

Micromax had earlier begun its journey with the production of low cost sets which provided buyers a holistic smartphone experience. For instance, it is possible for you to get an Android Jellybean or KitKat smartphone with a 4 inch screen and dual core processor for as low as Rs 4000 from Micromax, which is not possible from Samsung or Sony.

For larger players like the foreign multinationals to maintain their lead, they need to keep up with the changing trends of providing buyers bangs for bucks.

The trend was started with Moto G where Android KitKat and a 1GB RAM were offered at Rs 12,000, something which was unthinkable when Samsung was reigning. However, the ball game has changed completely and it seems the time for smaller names to rule has come.