Smart watches have been around for a good 2 years now and they have been upgraded to fitness equipment as well. The Samsung Gear 2 and Gear Neo smart watches range were launched in the previous year’s World Mobile Congress in Barcelona.

Soon enough, every company worth its salt started producing smart watches which had health gear such as pulse rate and heart beat measurer, pedometer and other features. In fact, in 2015, tech giant Apple is going to launch its own brand of smart watches which indicates that smart watches is here to stay for long.

Smaller brands such as Lenovo have also started experimenting with the technology. Although the smart watch come fitness band is a concept that has ceased to be novel, Lenovo has not trodden down this path before. Hence the Lenovo Vibe Band VB10 was formulated and showcased at the International Consumer Electronics Show or CES 2015 being held in Las Vegas. 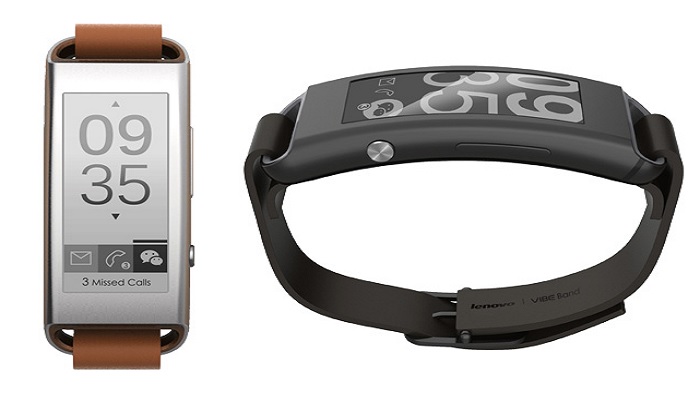 The company aims to carve its own niche in the territory of smart watches which already has watches and other bands fighting over. The gadget is an e-ink one which is quite novel. The band has been priced at Rs 5,500 or $89 and will be made available to the masses from April onwards.

The vertical display unit is quite large and always on. The e-ink display unit shows the time, smartphone notification and stats. The battery has an impressive seven day life cycle while the watch has an IP7 coating on it which allows you to keep the watch at the depth of a metre for 30 minutes almost. You can be sure of wearing it on you when you shower at least!

These features definitely put the Lenovo Vibe Band VB10 ahead of the competition. The only one which comes slightly close to it is the Smart Band Talk by Sony. The watch from Sony has another benefit- it can take calls which the Lenovo one cannot.

The display unit on the Lenovo Vibe Band VB10 is a curved one with the buttons placed along the side of the metal bands. The straps are made of rubberized materials. The appearance of the watch is quite sleek from a distance although this kind of a design shall remind you of a lot of other smart watches, which brings down its uniqueness. Nevertheless, it is a classy watch with a slim build and curved e-ink display.

Among the fitness apps included in it is the accelerometer which helps to track calories, steps, sleep and distance. Instant notifications can be displayed on the Lenovo Vibe Band VB10 for SMS, calls, Twitter, Facebook and much more.

The display space available on the smart watch is around 150 characters. Embedded within is a function of phone finder along with proximity reminder which notifies the user when the handset is too far.

The demo given at the CES 2015 of the Vibe Band VB10, only notifications to emails, SMS, Twitter, missed calls and emails were displayed. None of the third party applications seem to be supported. Also, it seems as if there is no way for expanding the functionality of the Vibe Band from what is offered. To many, the smart watch may seem sluggish and limited on the features side.

The biggest issues that users may face with the Lenovo Vibe Band VB10 is the gravy slow interface which has to be operated by the aforementioned buttons on the watch’s right side. Pressing the down or up buttons may take a second or two for producing responses. Occasionally a black to white screen flicker was initiated which would remind you of the flickering screen on the Kindle E-Reader.

The Vibe Band would make you scroll through a number of options on the menu for reading your notifications only. Therefore, it can be safely said that the slow interface may be cumbersome. It is one of the biggest issues that you may have to deal with, particularly since it is supposed to be a time saving device.

The watch’s e-ink display has a pixel density of 230 pixels per inch. It is quite effective for this basic smart watch as it comfortably displays the 150 characters on screen. The fundamental question lies in the way the app from Lenovo shall support the notifications and how accurately or well the fitness functions of the band works. Basic counting of steps and activities are supported on the watch but not calculation of the heart rate.

The Lenovo Vibe VB10 has a chunky metal body and it comes in numerous hues. Despite generating so much interest as a low cost smart watch, the catch is that it may not hit all markets. In fact, the US may not receive a release at all. Thankfully, India is among the list of countries which shall receive the watch.

Also, the launch date may be a little too delayed as several smart watches are slated to hit the market this year. Tech geeks comment that the watch would have made a lot of splash if it was launched in the previous year.

The positives about the Lenovo Vibe Band VB10 is definitely is 7 day battery life and uber-cool appearance with a narrow body and super thin strap. However, some significant performance sacrifices must be made for achieving the traits.

The weight of the smart band is only 30 grams and it has MicroUSB and Bluetooth 4.0 built in. To make the watch a better success, Lenovo must consider a simplification of the interface with lesser number of buttons to press if it wants to compete with the lightweight smart watches.

Lenovo has recently acquired revived handset maker Motorola which already has a smart watch of the Android Wear variety. Currently, the company is targeting emerging economies of Russia and China. The Vibe Band may not be a great success but it would definitely provide the company with some insights to come up with better e-ink smart watches in the future.

Nevertheless, it has some features that tech freaks would go gaga over which may become the selling point of the watches.

EcoHeat S Review: Is It Worth To Buy This Portable Heater?