You must have come across a couple of videos on the internet, wherein people showcase their talent by flying in suits. I am not talking about Ironman, but the extreme sports of wing suit flight. The feeling is like being a human plane that is propelled by air and controlled by movement of limbs. The game that I bring to you today is in very close proximity to generating similar feelings whilst you are playing on screen; Jets-Flying Adventure.

In this post I will tell you how to download Jets-Flying Adventure Game for Windows 8/8.1/PC and MAC

The game will turn you into a pilot of your own destiny, who is to fly a paper plane. Being a player who can only be amused by some high level combating or planning games, I initially thought the game might be rather upsetting. However, following the success curve of this game I installed it and played it to become another fan in its long list. 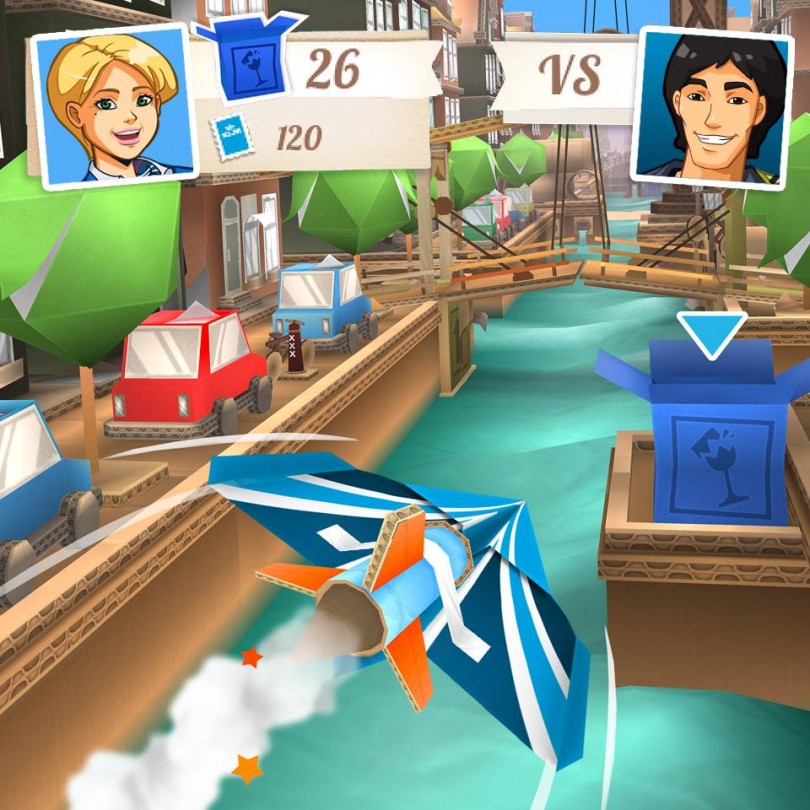 The theme of Jets-Flying Adventure game is based around the beautiful city of Amsterdam, with a great approach towards detailing. You will love the sightseeing as if it is almost you flying over the paradise city. You are to fly this paper craft through the streets, the river, the underpass bridges, famous canals and all kinds of uncommon natural or man made creations to collect post tickets.

As you begin with the game you will be asked to select a city, choose a mission and pick up a power up. The list of cities includes Amsterdam and other beautiful cities of Netherlands. The missions have been categorized into stamp collector, sneaky pigeon, time travel and so on. The powers that you can add to your jet, ranges from adding no power to stamp multiplier, vacuum power and even jet pack. In the stamp collector you need to collect enough tickets to pass through the magic number and make it to the next level which is sneaky pigeon.

I found the plot for sneaky pigeon to be very interesting and challenging due to the chasing part that the pigeons add to the stage. It takes some good practice with this paper plane to run after the pigeons who just stole your tulips and are flying away. Moreover it will take you 50 tulips and some good number of tickets in order to reach the time travel stage. Jets-Flying Adventure will keep your eyes broad open, as you need to stay alert for the incoming trees and bridges. 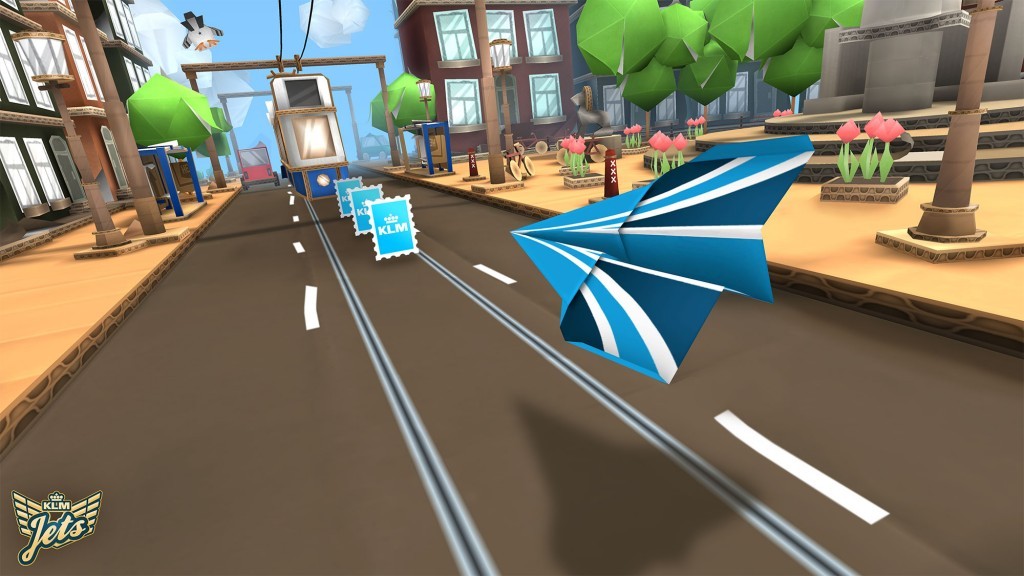 The controls are also very easy, as it takes only swiping movements of your thumbs to steer in all the 3D directions. As Netherlands is a base to KLM (Koninklijke Luchtvaart Maatschappij N.V.), so you will continue to find its actual aircrafts flying past you. Not only that, but if you are a flyer at KLM then you can also earn extra in-game reward points and goodies. This offer further adds a touch of reality to the game.
Jets-Flying Adventure can be played in both single and multi-player mode. The single player mode is a thrill due to the challenging environment created by the system, while multiplayer allows you to invite your friends for a face off. You can also add the game to your social networking account like that on Facebook and prove your mettle on the leader board.

The game requires a whopping space of 46MB due to its high quality graphic and vivid imaging. It may also appear as a surprise to you, but Jets-Flying Adventure game has been developed by KLM itself. The magnificent marketing strategy by KLM and adding another hit service to its list, the game will give you a brilliant feeling. After covering the famous Dutch cities, the developers are planning to add further more metropolitan cities to the game by year end.

What if I told you that you can download Jets-Flying Adventure Game for Windows 8/8.1/PC and MAC? 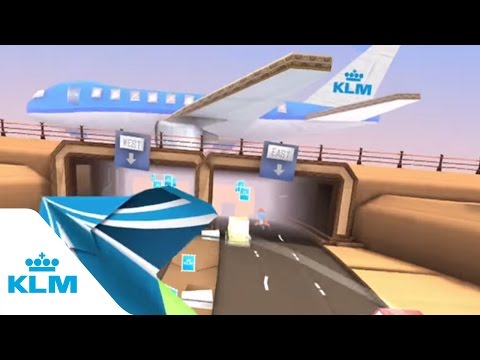 Whether you belong to any age group and wish to play something off the usual, then Jets-Flying Adventure will prove to be your worthy opponent. The greed for gaining control on the cardboard plane will drive you addictive about the gameplay. But playing it can sometimes turn to be hectic on tablets and phones. The continual movement of thumb and keeping an eager eye on the smaller screens can take away the fun even when you are pulling stunts.

I have however found myself an ease from such problems. The mobile gaming industry is turning up with great new ideas every day and I don’t always feel like playing them on my tablet, so I turn to my laptop. You can as well enjoy any mobile or tablet game on your personal system by using Android and iOS emulators. What these emulators do is, create favourable digital environment within your machine and make it apt to play any such game on the system. I mostly use emulators like Andyroid and BlueStacks to get the job done on my laptop. After all, great games deserve wide screens and high grade speakers to create the gaming ambience. 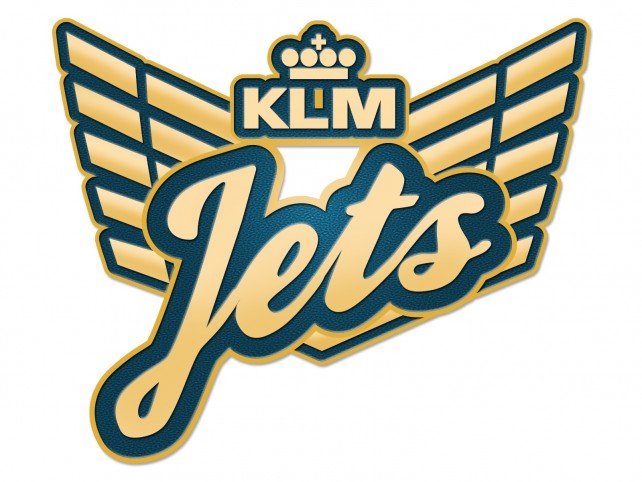 Here is how to download Jets-Flying Adventure Game for Windows 8/8.1/PC and MAC using BlueStacks

Just follow the below steps and you can fly through Jets-Flying Adventure game in no time. 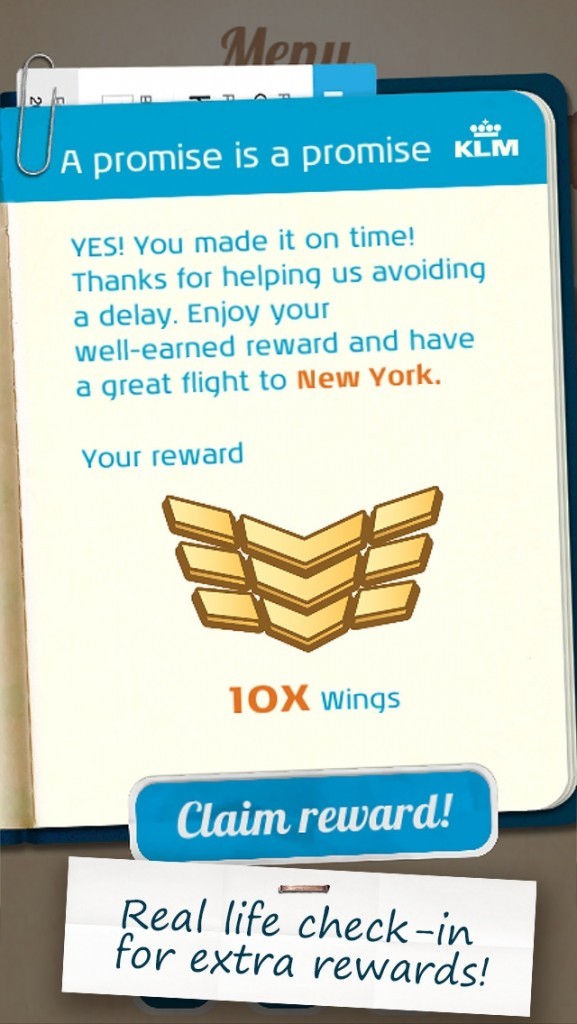 Here is how to download Jets-Flying Adventure Game for Windows 8/8.1/PC and MAC using Andyroid

The usual flying or copter games require you to propel the plane against gravity and make your way through some ugly obstacles. So what’s new about this game? The twist lies in the fact that the plane is made out of paper and faces some unusual turbulence due to varying air flow. Yes, taking control of this vehicle is not a familiar affair as it is built to take sharp turns and make 360* barrel rotations.