Do you like a malware affected computer? I hope you don’t. There is no other annoying task than operating a malware affected PC. You can’t take the desired action. Most probably, you have to wait impatiently after a mouse click or a keypress. Do you still want to operate a PC with malware??

Cyber world has become vulnerable to threats like never before. So, an antivirus is an essential software for you no matter you have a high- end hardware. There are many antivirus applications to choose from. How can you distinguish them to find the apt one for you? Don’t rack your brain. Here comes Bitdefender antivirus.  Download for Windows 7, 8, 8.1, 10 & Macbook.Read our unbiased review of Bitdefender Antivirus 2016. 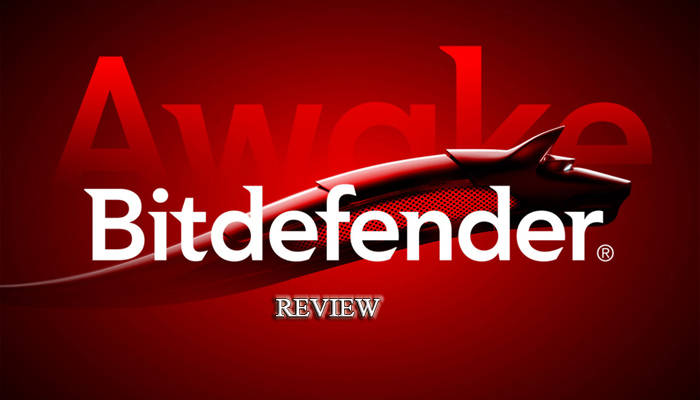 Bitdefender has a history of about one and a half decade starting from 2001. Hence, you might have heard of this already. They have a wide range of security software, both paid and free. This Romanian company already got more than 500 million users. So, don’t worry about the credibility of Bitdefender.

The interface of this software is clutter- free. There will be no confusion to perform a scan or security task. Just open the app and choose the option right away. That’s all. Enough intro? Then, let’s look into the features of Bitdefender Antivirus.

Everyone prefers a feature- rich antivirus so that we can reduce the number of applications. For example, an antivirus with computer optimization options can kick away any dedicated optimization software. Bitdefender antivirus is perfectly your cup of tea if you want one with full of features.

Following are the incredible features of Bitdefender.

I can see your smile. ‘Free’ is a seductive word. Everyone stops on seeing that word. Bitdefender guys know this human psychology. That’s why they are giving a free version of Bitdefender Antivirus.

If you downloaded many free versions of paid apps, you would know their trap. The majority of companies lock most of the features in free version. The only thing you can do is basic action. What’s the point of downloading such an app?

No such worries here with Bitdefender antivirus. Though it has very few locked features, you are provided with loads of unique options too.

This free antivirus can also be used as a demo version before taking a decision to purchase pro. Click here to visit the download page. Download Exe file from there and proceed with the installation.

The first impression is the best impression. Have you heard this saying? Be it first or the last impression persuades our mind to use something more. Suppose you have two themes on your smartphone. What will be your primary item? 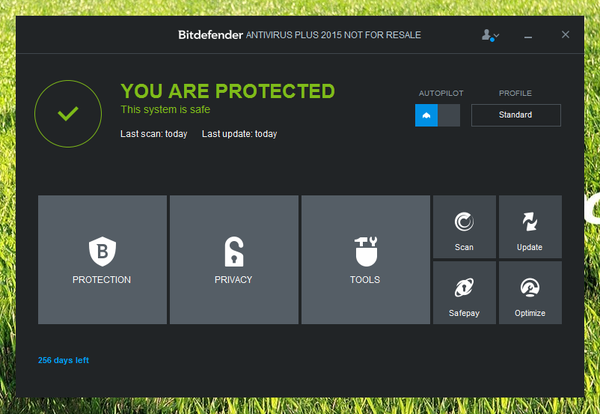 Undoubtedly, one that creates the best impression among the two, right? That’s why I said impression determines usage.

Bitdefender Antivirus has got a complete makeover with its 2016 version. The company has kept the design simple and hassle- free.

See the image given below to have a gist of its design. Given below is the home. Most of the options can be accessible from here itself.

This one is a flat UI having a pinch of design from Android 5.0 Lollipop, Windows 10, iOS and Mac OS X.

The top of the home interface shows security status of your machine. A green tick with ‘YOU ARE PROTECTED’ and ‘This System is Safe’ message indicates your computer is free from threats.

Under the status, there are four big squares of which the fourth one has been divided into four icons. On the top right, you can see the name of the currently active profile.

Protection is the primary thing we care in an antivirus, right? The very purpose of an antivirus is not anything but to secure the computer from malicious attacks. 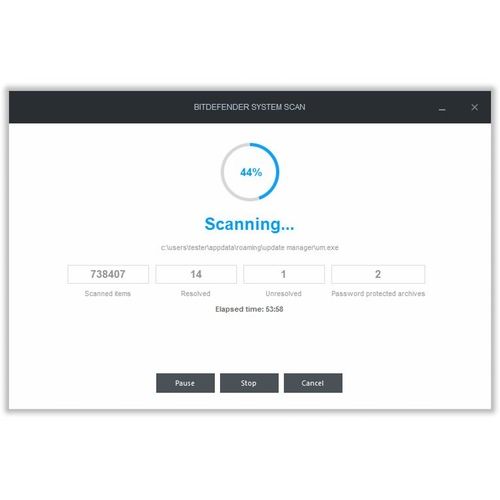 Bitdefender Antivirus is a complete package to offer you maximum possible security. If you don’t become satisfied of their free version, just keep calm and purchase premium.

I already gave you a brief info about the home window of Bitdefender Antivirus. There is a button called protection. Clicking on it will take you to another window with Antivirus, Web Protection, and Vulnerability options. 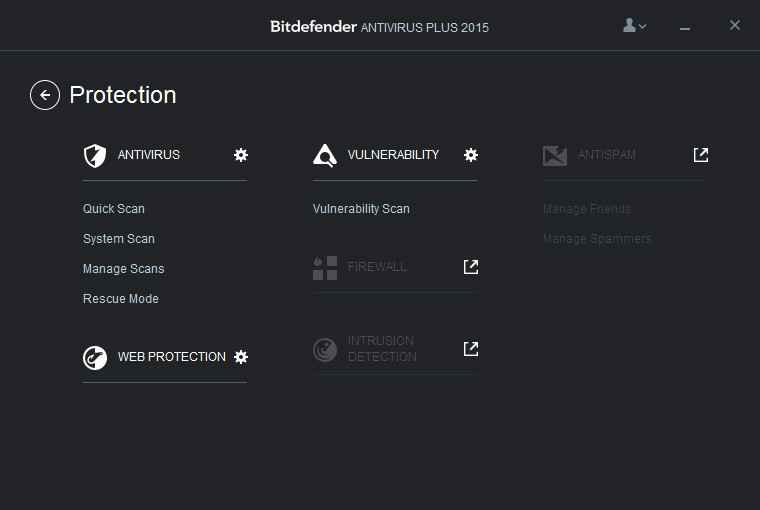 You can perform three different scans with Bitdefender’s intelligent scanner, which are Quick Scan, Full System Scan, and Scheduled Scan. The last one lets you automate scans so that malware scan will not occupy your brain anymore. 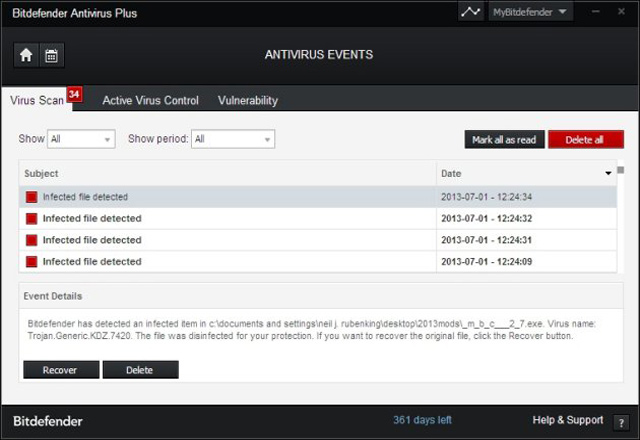 Active protection is available which monitor every file you operate. If it finds any risk, you will get a warning at once.

Web protection analyzes each and every website you visit and blocks phishing and hacking attempts. 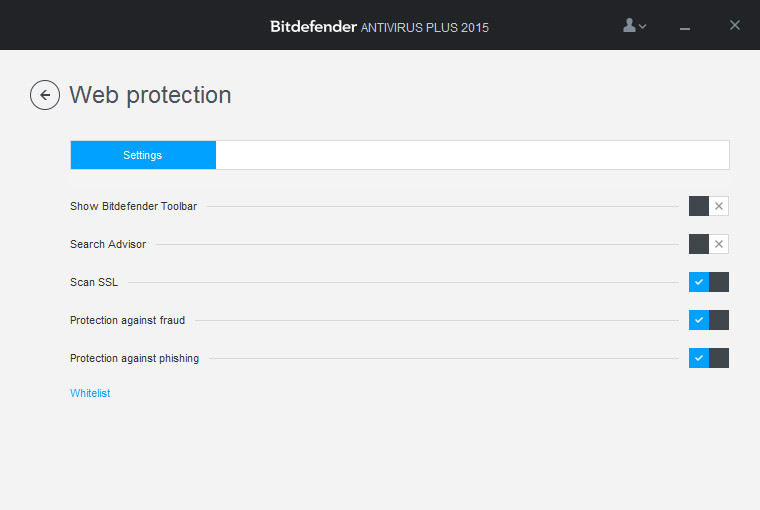 Email attachments will not damage your computer if you use Bitdefender antivirus because it has a dedicated Email shield.

Today, every Antivirus comes with a feature to enable us creating a rescue disk. It can be used to create a bootable disk to be used when our primary partition will be damaged. Bitdefender Antivirus also gives us the option to create a rescue but in a convenient manner. 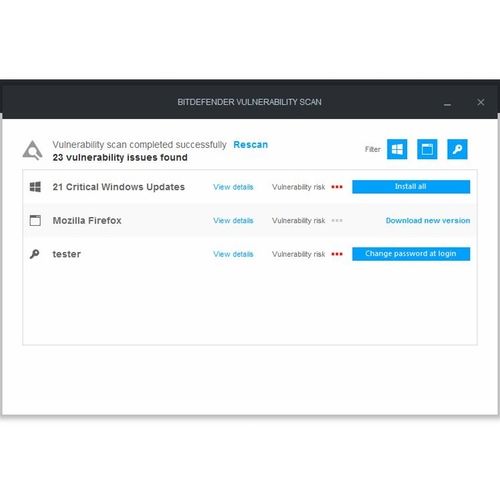 Every other tool needs to be installed on another computer to create a rescue disk. Then only, we can bring back our damaged machine to the previous state. But in a computer with Bitdefender installed, you can access it in a Linux partition (comes with the software) when you find your primary Windows partition needs to be repaired. So no external media is needed. 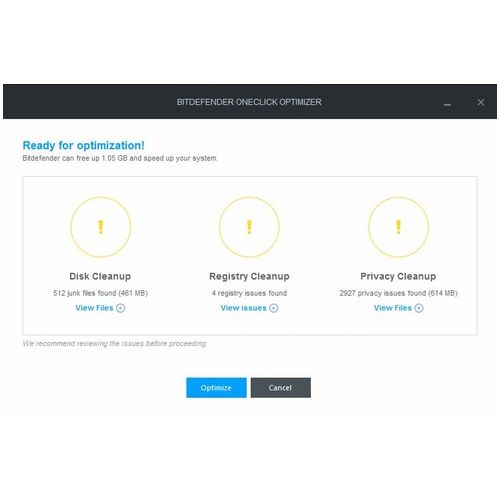 TuneUp is another set of options in Bitdefender. It can be a real alternative to a PC optimizing tool like TuneUp utilities or Glary Utilities. 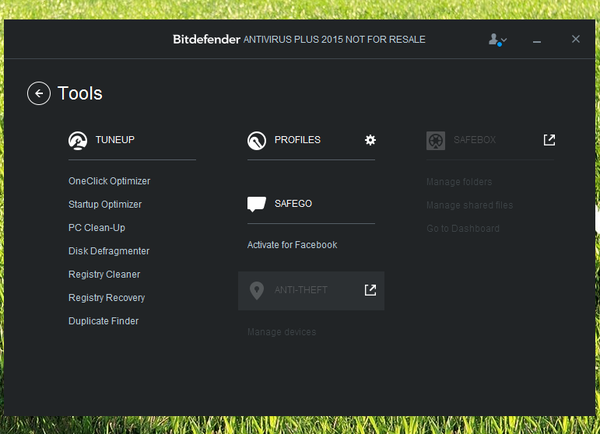 A profile feature is also available to customize the options to your convenience. 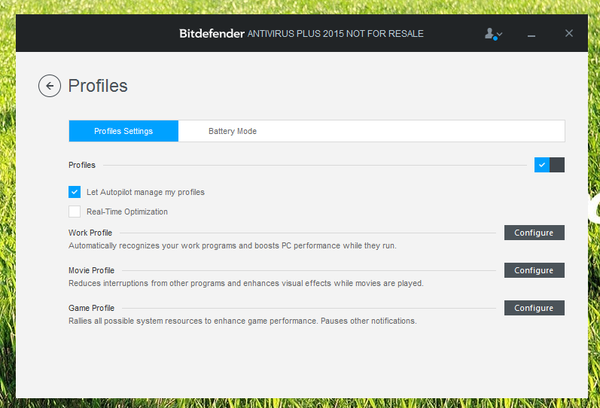 A virtual keyboard feature is also available to help you from being spied by keyloggers. 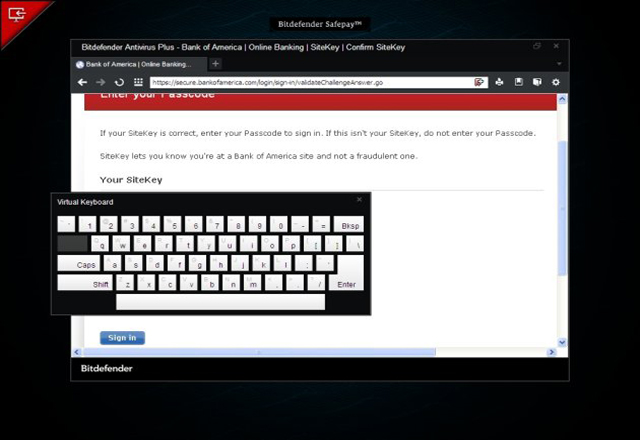 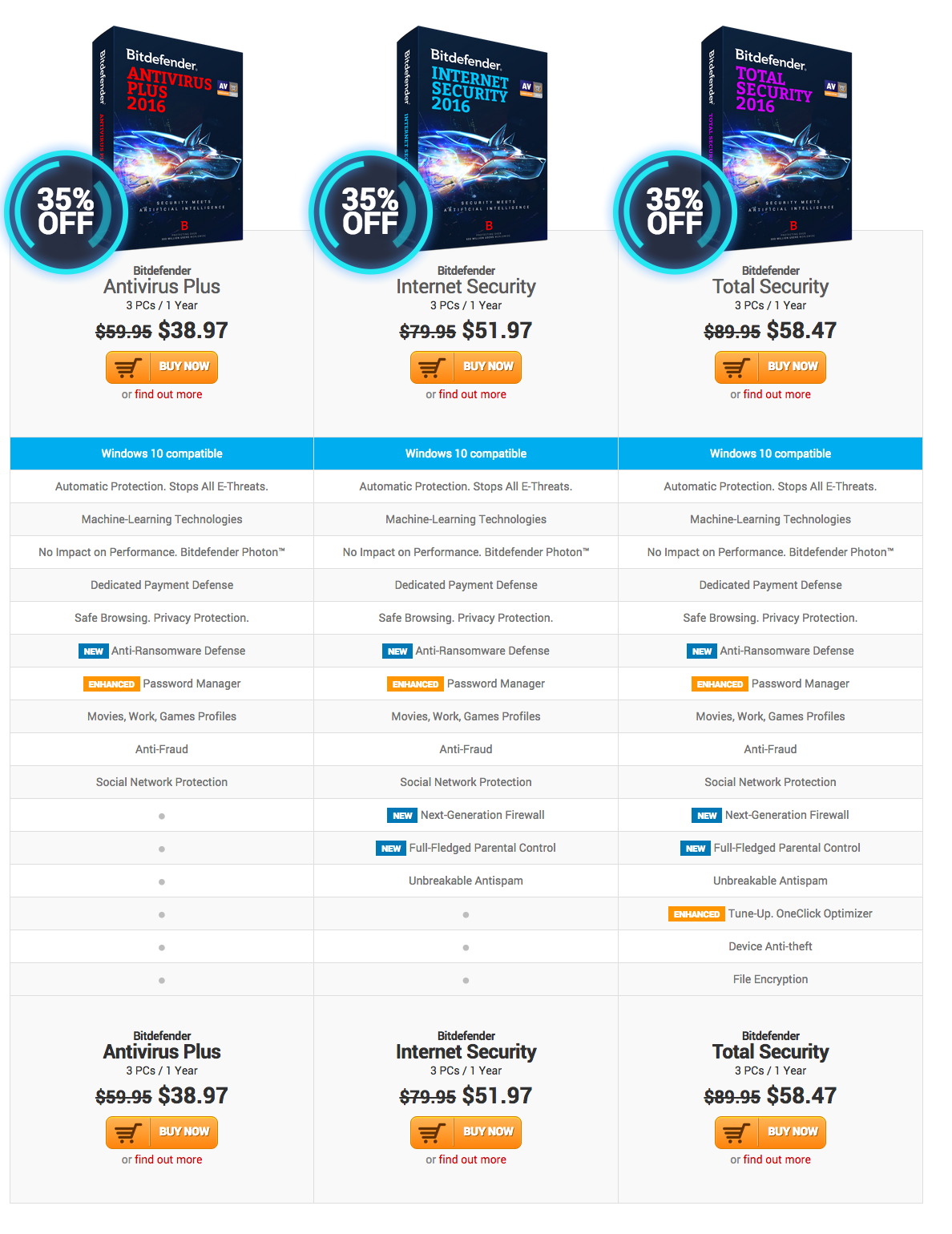 Bitdefender already proved that it is a must- use tool for any computer. Considering the level of service it offers, we can’t say it is overrated. Check out the given image to have an idea of the pricing package.

Protect your device from electronic threats and save your battery with Bitdefender Mobile Security.

Bitdefender Mobile Security provides unbeatable cloud-based malware detection & a smart antitheft experience for your Android with virtually no battery impact. All on top of the best Android security out there.

Absolute protection with zero negative impact on speed and performance

Bitdefender Antivirus for Mac provides absolute protection against new and unknown threats without slowing down your Mac. It connects to Bitdefender’s advanced Cloud-based technologies to instantly detect and block threats, regardless of where in the world they are born.

It builds on technology awarded PRODUCT OF THE YEAR and uses machine-learning to fight off cyber-threats without impacting your device’s performance. It automatically takes the best security decisions for you, including securing your data, online payments and privacy.

Bitdefender Antivirus Plus 2016 is officially the best antivirus software today.

It builds on technology awarded PRODUCT OF THE YEAR and uses machine-learning to fight off cyber-threats without impacting your device’s performance. Exceptional in its ease of use, it automatically takes the best security decisions for you, including data protection, securing payments and safeguarding your privacy.

Comprehensive protection for desktops, servers, and mobile devices plus security and antispam for Exchange mailboxes managed from a single console.

Ready to Use Bitdefender Antivirus?

The table has been turned. Now, your choice has come to decide whether to go with no or full protection. If you prefer latter, you can’t exclude Bitdefender. It is a complete package to secure your computer from malicious files and malware attacks.

They have included an innovative option that is TuneUP. Also, the unique way of creating rescue disk within the internal drive will be helpful for you.

I am looking forward to reading your opinion in the comment section. Just use this tool and leave your feedback. Meanwhile, don’t forget to share this on social media.