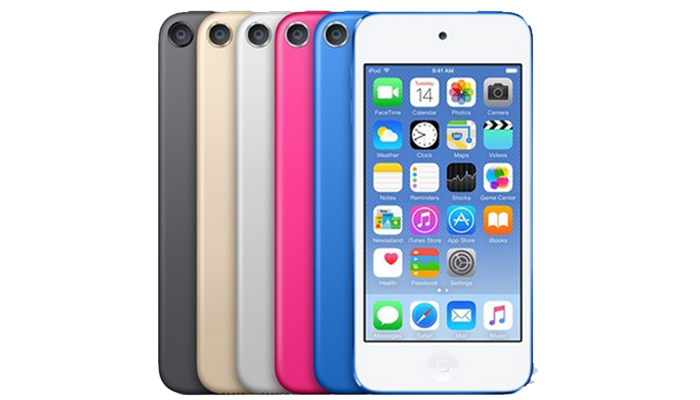 The Apple iPod Touch 6th generation comes with the same 4-inch (1136 x 640 pixels) multi-touch IPS display with a pixel density of 326ppi. It is the same display found in iPhone 5/5s/5c. It is powered by faster Apple A8 64-bit chipset along with the M8 motion co-processor, compared to A5 found in the fifth generation. It is the same chip used on iPhone 6/ 6 Plus.

The iPod Touch 6th generation now comes with an 8-megapixel iSight rear camera with LED flash, f/2.4 aperture, the same as the iPhone 5. It can record Full HD 1080p videos as well. On the front, it has the same old 1.2-megapixel front-facing camera with a f/2.2 aperture for your selfies and video calling. It can also record 720p HD videos. On the connectivity front, it comes with the latest WiFi standard – WiFi 802.11 a/b/g/n/ac (dual band) and Bluetooth 4.1 for faster connectivity and faster data speeds.

The Apple iPod touch 6th generation is available in silver, space grey, hot pink, gold and blue colour variants and is available in four storage configurations. The 16GB model is priced at Rs 18,900, 32GB for Rs 22,900 and 64GB for Rs 26,900. These prices are inclusive of VAT but they are very steep compared to the U.S. pricing which starts at $199 (INR Rs 12,600 approximately). However, the 128GB model is not available in India. Also, the iPod shuffle and iPod nano are available in blue, pink and gold colour variants, in addition to the already existing space grey and silver. These new iPods will be selling via select Apple Authorised Resellers across the Indian market.

Commenting on the launch, Greg Joswiak, Apple’s Vice President of iPhone, iPod and iOS Product Marketing said, iPod touch gives customers around the world access to Apple Music, the App Store and iOS, the world’s most advanced mobile operating system, starting at Rs 18,900. With big advancements like the A8 chip and the 8 megapixel iSight camera, customers can experience next level gameplay, take even more beautiful photos and enjoy their favourite music, TV shows and movies.